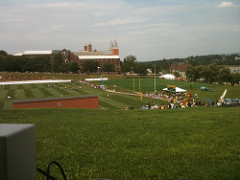 Steelers will not use St. Vincent College for training camp this year

The Steelers and Dallas Cowboys will be the first teams to begin training camp this year – to prepare for the opening preseason game in the NFL. The two teams will participate in the Hall of Fame game in Canton, Ohio August 6th.

The opening game of college football season later this summer will not occur in Ireland. Notre Dame and Navy were to play in Dublin August 29th – but will look to play in Annapolis Labor Day weekend due to coronavirus concerns.

The post Steelers will not use St. Vincent College for training camp this year appeared first on ButlerRadio.com – Butler, PA.