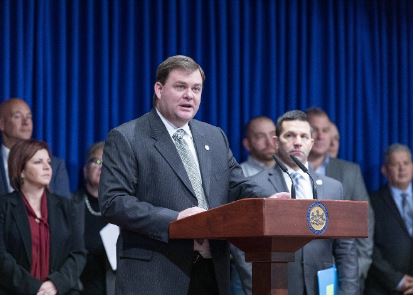 The Senate passed a bill that requires the legislature to approve entry into the initiative—also known as RGGI. Senator Joe Pittman of Armstrong and Butler County.

“The Governor is attempting to impose this tax unilaterally. And therefore I believe, ultimately, illegally,” Pittman said. “If Pennsylvania joins the RGGI scheme under this circumstance, we’ll be the only state in RGGI that was joined without the consent of the general assembly.”

Republicans however did not go alone on this vote, as they were joined by six Democrats to make it 35-15.

Wolf meanwhile joined Democrats yesterday to lay out plans for investing revenues from RGGI into workers impacted by the cap-and-trade initiative.

“Through these investments we can address the existential threat of climate change that effects all of us, while also ensuring that people and the communities that form the backbone of our existing energy economy are not left behind in the transition,” Wolf said. “This is really important.”

Democrats say the state could receive up to $250 million each year from joining RGGI.