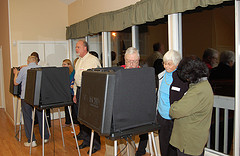 All Precincts Will Be Open For Election In Butler County

Mail-in ballots have become a popular topic as we gear up for Election Day, but in-person voting still figures to be the most popular way to vote this November.

And officials say all 89 precincts will be open and operating on Tuesday, November 3rd. There are some polling location changes, and election officers say all voters in those areas will be made aware of the change.

This is a process he said that is popular among “snow birds” who head south for the winter.

The post All Precincts Will Be Open For Election In Butler County appeared first on ButlerRadio.com – Butler, PA.